Showing posts from September, 2021
Show All

But is it any good? As you might have noticed, I am now a freshly licensed radio amateur .  As such I do need a transceiver or two in order to get on the air.  This is the story of one of my new radios. I have a limited discretionary budget to use for my new hobby, and I have to say from the outset that my lovely wife has been very supportive.  As such, I want to try and get the best value for our money.  One evening I stumbled upon this little item on Banggood for a little over $A150 including shipping.  Covering both 2m and 70cm bands with a claimed 20W output it seemed almost too good to be true.  I bought one. About ten days later a tiny package arrived for me.  At just 98mm x 43mm x 126mm the photos don't convey quite how small it actually is.  The entire case serves as a heatsink so it is heavier than it looks, but certainly not bulky. The standard power cable comes with a cigarette lighter plug.  As I intended to run it from home using a regulated PSU, I just cut the plug o
Post a Comment
Read more

DIY feed-through panel for your antenna cables I'm fortunate that I have a nice warm space inside to use as my "shack", but logically my various antennae are outside, so how do I get the cables from the antenna to my radios?  I don't want to go drilling holes in walls etc. because that would make me very unpopular with my wife and it would also invite leaks, drafts, pests and other generally unwanted things. Since I have a large window near where my gear will be located, I hit on the idea of making a filler panel and then attach a bunch of connectors to it.  Naturally I wanted it to look as nice as possible. The only modification to required to the window is to remove the insect screen.  In my case, this is fine since we never open this window anyway.  Otherwise you may consider making up a narrower screen. The window closes up on this panel holding it in place and keeping everything sealed up. I chose bulkhead connectors because I don't need to solder any connect
Post a Comment
Read more

Ham: without the sandwich 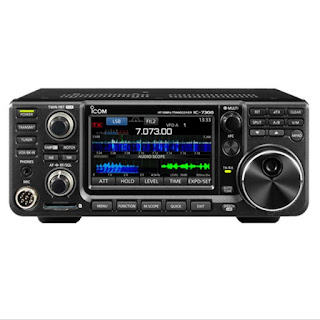 Ham: without the sandwich   My wife loves to call me "a bit of a ham" , and I am proud now to say that she is right.  Herein lies the story: Somewhere around 1976 I was a boy scout when I attended a Jamboree Of The Air at the home of Lyle Patterson (VK2ALU) in Mt St Thomas in Wollongong.  I think that the furthest contact was New Zealand, but most contacts that day were actually around the Illawarra.  Nonetheless I was amazed by this concept.  I could have my own transmitting station and talk to anyone, anywhere?  Sign me up! Turns out that in those days, it was not so simple and the idea of learning Morse Code, even at 5 words per minute scared me off.  Yes, I could have gone for the "Z-Call", which did not have this requirement but I wanted to reach the world, and this meant HF.  The idea got shelved because school got in the way (and having no money was also something of a concern) but I did get involved in building and restoring plenty of receivers over the yea
Post a Comment
Read more
More posts