Seriously, WHY would you do that?

The first computer I got to use was a PDP-11 owned by a time-sharing bureau in Wollongong in the 1970's.  From memory they ran services for car dealers or some such thing.  The operating system was RSTS/11.

When I finished high school I was able to get access to a VAX/VMS system owned by the Department of Education.  Security wasn't a big thing, and my lecturer even gave me the phone number for a dial-in port so I could get access on the weekends.  I discovered the machine I had access to was part of a larger network of VAXes and with a few simple commands, I could jump from one to another.  Just looking around mind you, nothing even remotely interesting was attempted.

VAX/VMS, and later OpenVMS on Alpha have played a moderate part in my career, and I still enjoy tinkering because of the generous way that Digital,then Compaq and now HP/E have supported the hobbyist community.

Emulators are one thing, but getting your hands on real hardware has something even more special about it.  So let's look at the options shall we? Getting hold of a VAX in any working form these days is near to impossible, and if one does come on the market, the prices are just stupid.  I live in hope that I will come across a 780 or similar on the side of the road, but realistically, it's not going to happen. 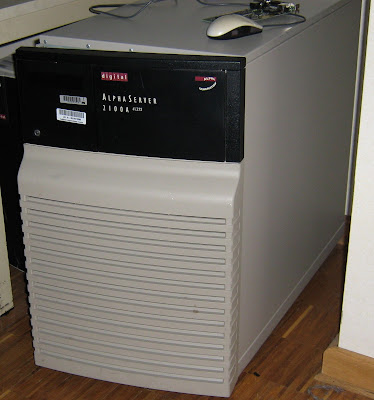 The Alpha was Digital's big bet on RISC, and it did make a good replacement for the aging VAX architecture, and positively screamed under VMS, but Compaq didn't seem to understand it, or see a market so they killed it off.  Like the original VAX machines, these are pretty hard to get now because they just didn't sell all that well in this part of the world.  Sadly I had an Alpha, but I let it get away...

So I'm out of luck, right?  Wrong.  When HP acquired Compaq they did see value in the VMS and other parts of the business that Compaq had neglected.  They also had their own architecture, PA/RISC, which was in serious need of an update.

The timing was great, because Intel had second-generation Itanium processors available.  Rumour says HP and Microsoft were heavily involved in the development of a clean-sheet design.  HP seemed to have more sway, because there is a lot of carry-over from PA/RISC.

HP ran with the Itanium family in it's Integrity and Superdome products even after Microsoft pulled the plug on Windows for IA64 during the Server 2003 lifecycle.  You could until quite recently buy these machines configured for HP/UX or OpenVMS.

The last of the Itanium machines were discontinued somewhere around 2016 or 2017. (Correct me if I'm wrong there), and right now complete systems are coming off maintenance at little more than scrap value.  Snap them up while you can, because they won't be available forever.

There's the two main families you need to consider.  The Superdome, which I know not much about is the heavy hitter.  Modular and built to be fault tolerant.  Most of them need power I can't connect in my garage anyway.  But they can be really cheap for this reason.

The Integrity family were in my opinion more of an entry system, and available in either blade or conventional 19-inch variants.

I think by now, you can see where this is going.  Yep, I found some! 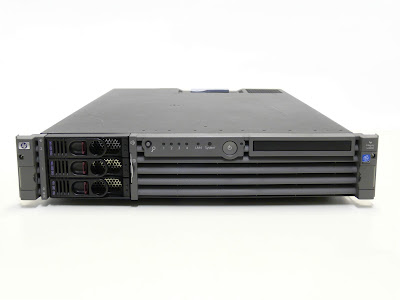 Make sure you get RAM with the machine, as it's ECC and not so easy to find.  You won't need a huge amount.  2GB or 4GB should be heaps for our needs.  The drives are old-school 76GB SCSI (Ultra 320), which are easy enough to find.  I'll grab some spares for future use while I'm at it.