There's nothing like  a ridiculous challenge to keep me amused, and this one is huge.  There are no instruction manuals or how-to guides, and definitely more questions than answers at this point.

I am trying to build a self-driving car.

Not a road-going car exactly, but I have taken one of those kid's electric cars (about 10% size licensed copies of real cars), and I intend to make it capable of driving itself, following a road, avoiding obstacles and such like.


UPDATED:  Watch a timelapse (kind-of) video of the build up:

But why use that?  Surely it would be easier to use a remote control chassis as a starting point?

Yes, you're right.  In a lot of ways it would be easier.  The biggest problem is that those chassis are rather small, which makes packaging difficult and it can limit the options I want to add.  My method gets around that, and I get more battery power for no cost as well.  Plus it really looks like a car (if you squint hard enough, anyway).

By way of explanation, my white convertible was made some years ago by a Taiwanese company called "LovBio", and it is called a "V6".  Externally it looks like a mid-80's Mercedes to which somebody added a BMW-esque kidney grill. 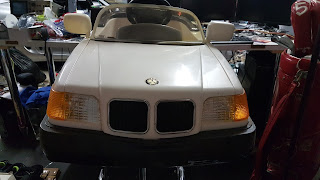 A six-volt electric motor drives the right side rear wheel, and the electronics consists of a collection of switches.

Just like using a real car, the mechanical challenges are at least as big as the computational ones.  For starters, I have to rebuild the steering mechanism.

The steering assembly is primitive to say the very least (see the next photo) with a "J-Hook" at the end of the steering column which pushes/pulls on steering links.  There is a lot of free play in the unit, which is probably not going to be an issue in this project.  At least in the early stages.

The plan at this stage is to remove the steering column and replace the J-Hook with a heavy-duty servo.  The car is quite light, so I am guessing that a servo intended for a 1/10 or 1/8 scale model will be a good starting place.  I am going to use a "20Kg" rated model, because I have some.

I have no brakes and only one driving wheel so the dynamics might be a bit of a challenge.  We can most likely make it two-wheel drive by installing an axle in the rear, and this will probably happen sooner rather than later.

The motor in my car states 4A which I presume is the stall current.  This means I can use a L298D H-Bridge driver module but it's going to need a bigger heatsink. Ideally I would like to use PWM to drive the motor so I can control its speed directly.  Given the light weight and single driving wheel, this would help a lot with stability.  As tempting as build my own DSC system is, I don't want to get carried away with solving the wrong problem.

Astute readers will note I have not mentioned any computing solutions yet.  I will get to that later, but for now there is more than enough groundwork to do.

* The sticker reads "Honk if you're autonomous"